Pencils; Jack of Fables ONE

Well, all the feedback on JoF#1 has been really good! I've read at least 20 reveiws(most of them linked via the Fabletown Community, thank you Cindy McShane) and they're very positive. All I can say is, "Man, just wait!"
Here are the first tentatvie pencils for the series. Strange how one becomes "seated" over the course of drawing a featured character. Jack began, with no gentle prodding from my Editorial Deity, Shelly Bond, to capture the essenced of a particular badboy on a certain network show which has an "L" as it's leading letter. OK. This after I had already made some stabs at the look of Jack. I've drawn him before, in an entire unpublished issue of "Fables"... So I had tackled with Mr. Horner before.
Eventually, Brad Pitt became a sort of mental-picture mantra, generally, as I drew the book. Now, finishing issue number EIGHT of the series, Jack has taken on more of a Matt Dillon mookishness, than the Pitt "Legends of the Fall" rebel.
At any rate, enjoy the scratchings below.
For some reason, it was very urgent that I complete Page 5 first. Something Bill requested. I'm fairly methodical and linear when I work from a script; I like running from page one through twenty-two. Only deviating from page sequence if there's a snag with the layout approval or if I git just plain yeller before some insane request from Matt and Bill; which, I know, is my faoult for encouraging them by going all out when they ask for something, "OMG, this fool will actually DRAW a field of thousands of sunflowers singing!"
(Don't even think about it you two)
So, we start with page 5. 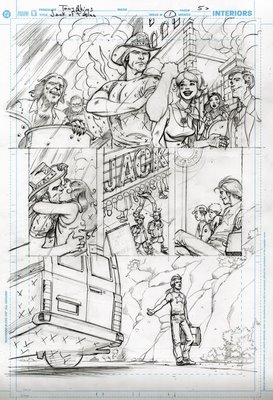 WTF is up with the suspension on that van!? 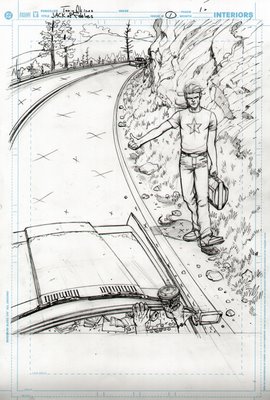 Ah! Note the switch-out of Jacks' ubiquitous briefcase. Originally the crew (Bill) wanted something unique and unsual for Jacks' journey. Then we (Bill) decided to go with something more standard..It was a good call, no? I mean, what are those bellows on the sides? Jeez. 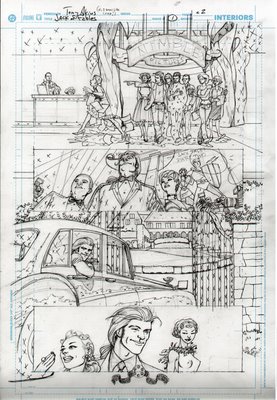 One of the great things about "Fables" is the l'petite motif features that Bucky adds to the layouts; the themed accents that trim the pages or harbors the page number. Astounding stuff, right?
Well you're never ever going to see that in JoF. Just forget about it. I tried; see? There at the bottom? The reel of film, decoratively unravelling? Enjoy THAT because that little nuance is EXTINCT after this page. Hats off to Bucky, though. 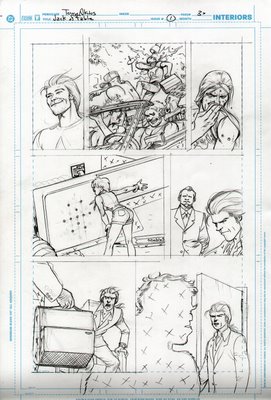 There's taht case again. I really am glad that the decision was made to have it be a standard briefcase. We thought that Jack would collect this like travel labels and such,. I mean, WHAT the hell kind of Samsonite crap was I thinking? 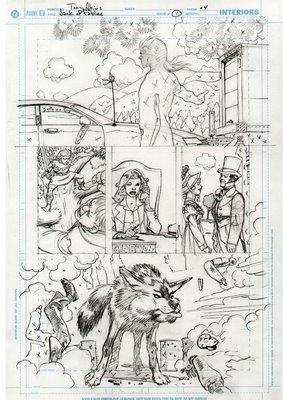 OK that cloud thing starts here...Fred Schiller claims that they're Chuck Jones Sheep without the little black legs and faces. I'll buy that. Prince Charming is shown circa 1840. I do a shitload of Googling to find authentic costume. Oh, Bill and Shelly didn't think I could pull off Bigby blowing out the Fabletown conflagration while in his lupine morphology...and LOOK! See what I can accomplish when I'm not on the sauce? 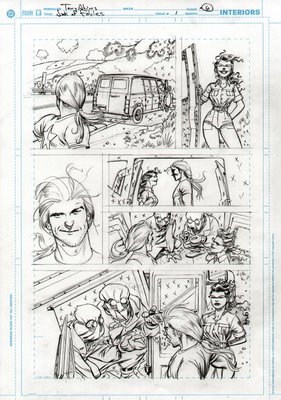 OK, now we're talking. This page rolled out well enough; Pris is still unfamiliar to me... 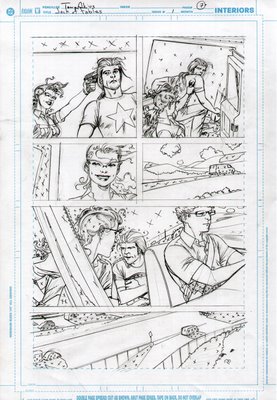 ...but I love how familiar she is with the Sig Sauer here, particularly panel two.
This early in a book, pray for these happy accidents. Watch the "cloud thing" starts over these next pages; a cross between Portugese Men-o-War and molars. 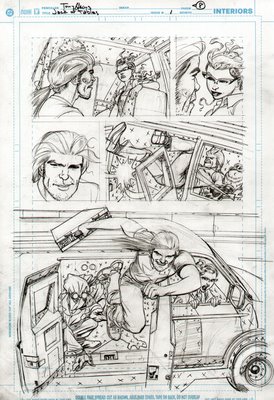 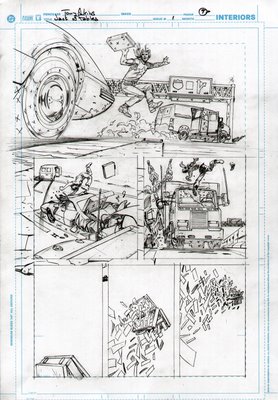 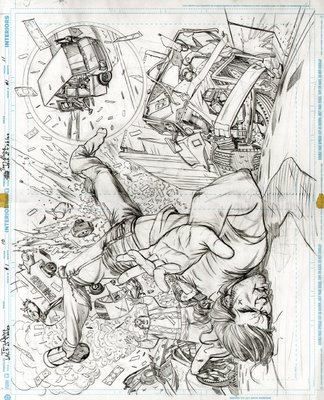 So what's wrong with you neck? 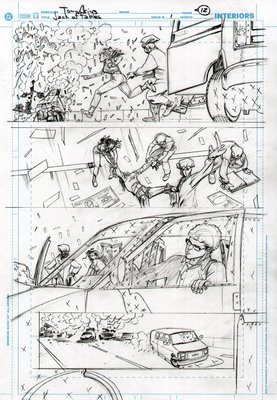 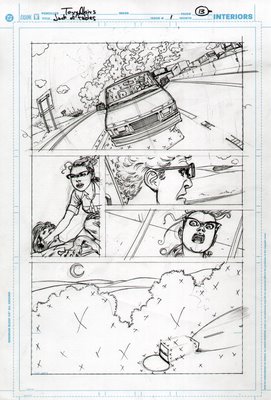 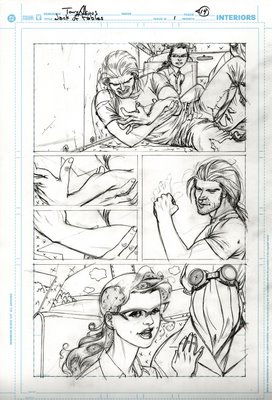 So notice here that Jack does not have that X-RAY dealie happening with his arm yet. That's something Bill and Shelly requested later. His face here in panel 4 is a little ferretish..mmm 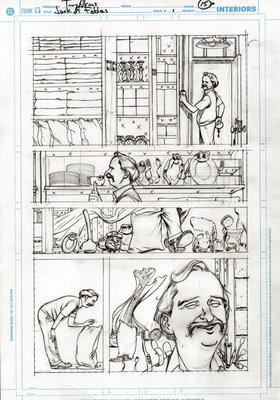 Here's more testimony that it takes a village to draw a comic (sometimes)...We could'nt be sure of what type of facial hair the Pathetic Fallacy would be sportin'...Matt initial reguested, per the character document, that PF would be like a college math professor complete with goatee. Everybody hmm'd and haww'd for a week until we decided to nix the lip-throw; the nose-coaster; the filtrum-filter; the two-caterpillars-snoggin-over-the-tunnel...
(See Below) 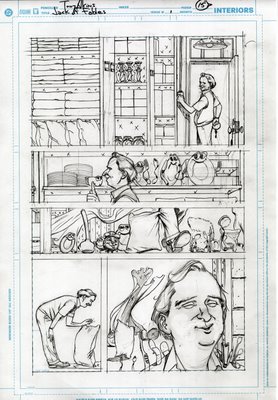 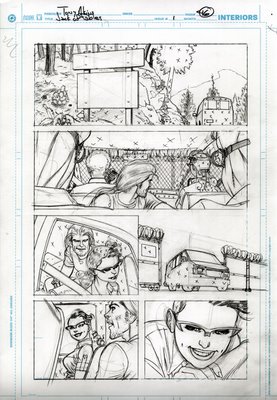 Ah..here, here we start with the phuckin' chain-link fences!!! 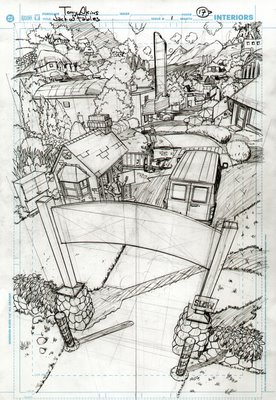 Bill SWEARS that he has a map of the Golden Bough; it's penned by pixies on the thigh of Thai Princess. Seriously. 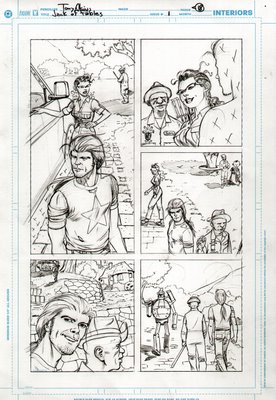 So now in the GB, we start to see the kind of facility this is; some of the individuals in the background are just wags at characters; unusual enough to pass for fables but vague enough to invite speculation and possible character assignment later. There's the Tinman, of course...Not too close to the MGM character. 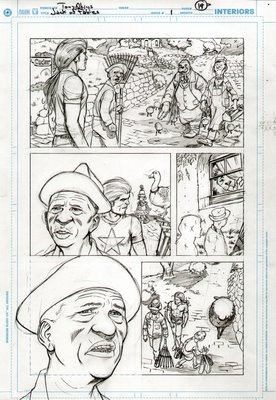 When first told about the Golden Bough Trustee, Old Sam, I thought to draw from (muse over, not actually draw in likeness) Morgan Freeman's character in "Shawsank Redemption". Everyone thought that was a good enough call. So I imagine Freeman's cadance in speech and motion when I render Old Sam. 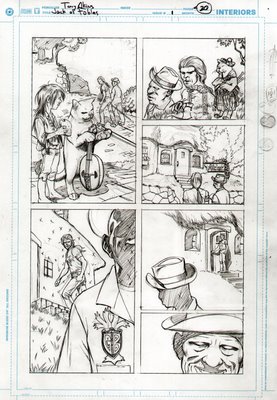 In Panel One, per the script, that's the starving street urchin of Victorian England, Little Tommy Tucker and the Cat and the Fiddle (geniune 11th century fiddle). I know, what's up with the Cat in the Kilt? Hey, I just draw, lady. 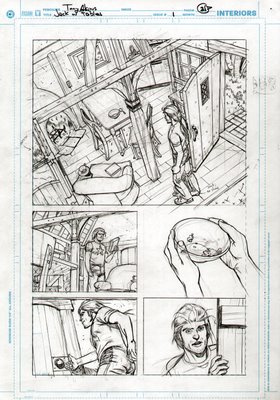 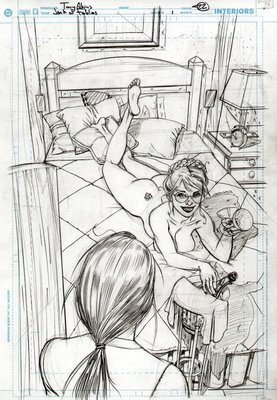 Oh wow, those pages are awesome, Tony.
Thank you for putting them up. I am totally impressed with how few construction lines/redrawing I see on the pages.

You do realize that if you keep putting goodies like this up on your blog, you are going to end up with all of Fabletown scurrying around fighting to see who gets to do your bidding?

MWAH-HA HA HA HA!
Thought the Adversary was diabolical, did you?

Thanks Cinders! I gotta get the rest of the commentary up (it was early morning when I posted).

Wow, Fred...THANKS!
When I worked in gaming, I learned that coders refer to writing code as "throwing" code.
Never one to miss an oppurtunity to embarrass myself, or muddle a similie I started bragging that the bit-heads I worked with "throw code like shit in an apehouse". Now the room where all the coders work is referred as "the Apehouse".

ppmTony,
Thanks for posting these. It is great to see how the pages developed and came to be. It is also great to see your raw uninked pencils. I hope this is something that continues as the issues continue.

Book one was great and I am definately looking forward to seeing where the series goes.

Thank you, Shannon.
Yes, I'll continue posting the pencils; I've over one-hundred more pages to post, but I don't think Bill, Matt or Shelly would be too thrilled if they were up before the actual issues are on the shelves :~)