As StrongBad would say, "Holy Crap!".
I can't believe the second issue is aight. Well, this will gimme an excuse to lope down memory avenue and do my best not to unsheath any spoilers or mix any metaphors. When first given the script Shelly was ready to bet that I had never in a million years thought that I'd be drawing Humpty Dumpty. Well, Shellers...I have drawn Humpty before. It was for an "ASYLUM" story back in the early 90's. It was weird, weird, weird; and THAT HD really still gives me the creeps. I'll post examples of that art at a later date so that this present specimen of the Eggy One can enjoy the spotlight on his own. 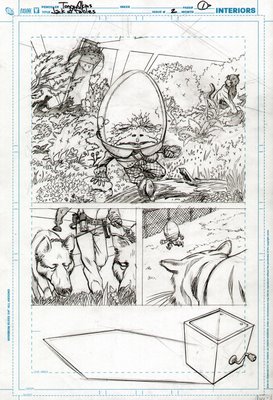 Costuming is one of my favorite things when doing historical related stories; research is HOT kids, don't do drugs! The original costume for D-man had a fashionable hat, as was vogue for the period. But Shelly felt that the brim, though pimpin', was detracting from the egginess of the character. She was right. As far as "the period" goes, you're on your own for discovering when that may be. I can't tell you.
Ha! See? Panel three? Goddamned chainlink fence...RRWWWAARRR!!!! 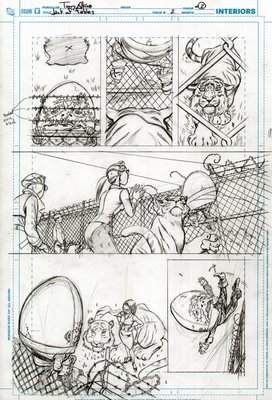 What!? German Tape AND Barbed wire? No way am I keeping this up...Although the cut tape gives a nice "creeping thorny vine" feel.
Mmm..kitty! 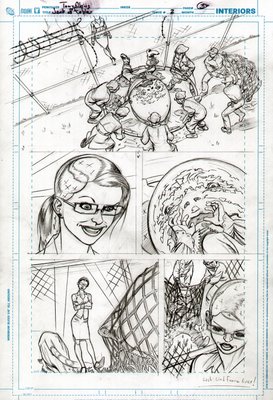 Mr. D's morphology is tied to the level of stress he is exposed to while held at the Golden Bough. A bit like a skin condition, his shell continually cracks and chips as he emotes giving him that great distressed look. 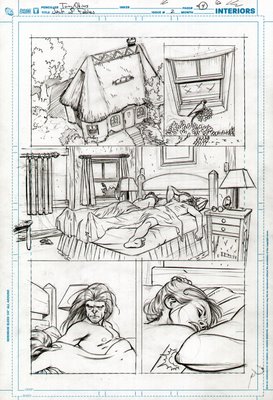 Coming up with a servicable floorplan for the cottages that lined the terraced valley of the GBRC worried (bothered) me. Only because one can never be too sure of how much of the story was going to happen within the walls of one of these buildings. The up-side being that they were all identical save for a few "personal" touches of the residents.
You have to go with thatched roofing with this bunch. 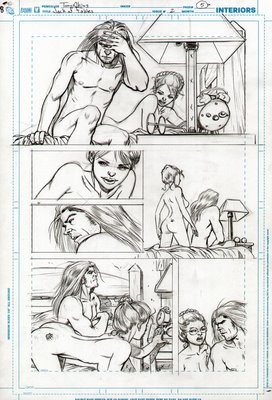 I swear that the placement of Goldie's specs in panel one was a happy accident. 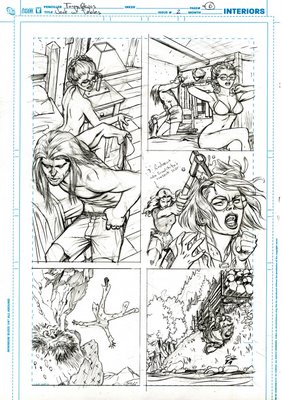 It's the hatchet cleaving locks of hair from Goldies' head that makes me wince. There's a documentary about the bloodiest day at the Indie 500 or maybe it's Daytona...a pit crewman is stuck by a rescue vehicle on it's way to assist a driver (who's already dead as it turns out), the camera just catches the poor guy rolling sickeningly across the tarmac; that's what I was thinking about in panel five.
Birdies! 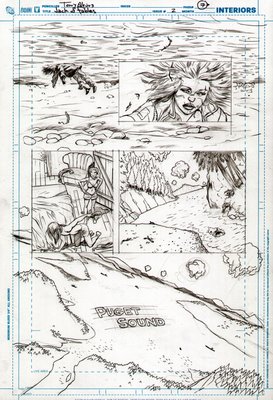 Glub!
Remember that shot of Shelly Winters in the river (no not in the Posiedon Adventure) during "Night of the Hunter"...Yeah, still freaks me the fuck out; the current moving by her as she sat dead in the buggy.
Clouds looking more "sheeplike" every panel, Fred. 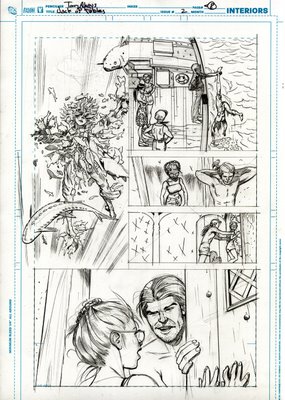 We lost the large fish near the top of panel one (I was hungry). Revise got, uh...revised in panel two. He's Clifton Webb meets David Niven. I try to convey a sense of 30's panache to his attire and surroundings; hence the feel of the yachting party.
Still having some "plastic' issues with Jack. 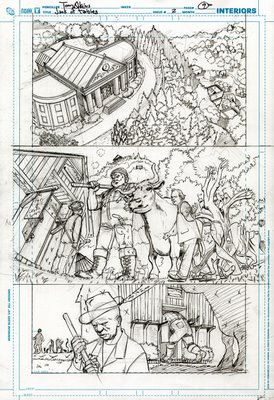 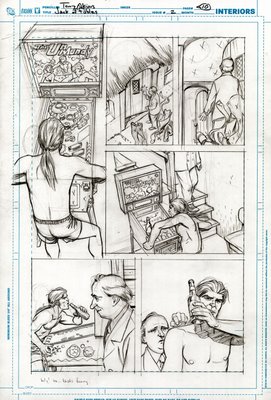 I have this friend who has a coupla kids. One of the kids, when he was 5-6, used to hump the carpet. He didn't know what he was doing, really. He'd just be playing on the floor or watching tv...then he'd get the urge, like a dog I guess. Thing is, he'd didn't care who was around. His mom would say, "Billy, that's UPSTAIRS behavior!" The kid would lurch up the stairs to his room, I guess. Panel five looks like there's some upstairs behavior going on. 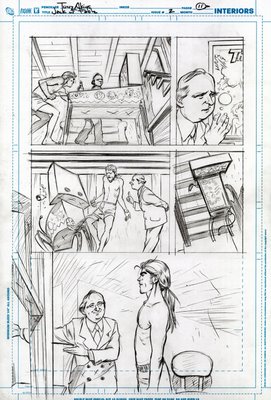 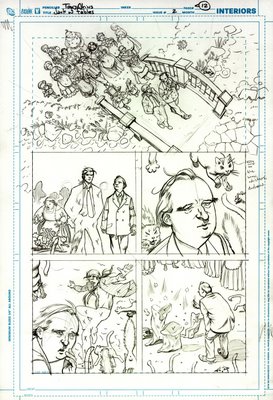 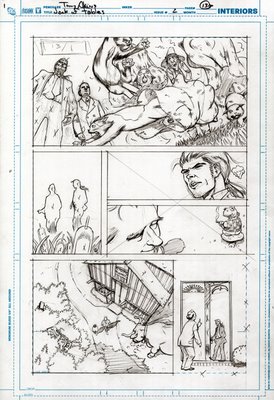 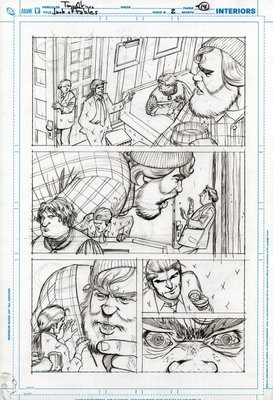 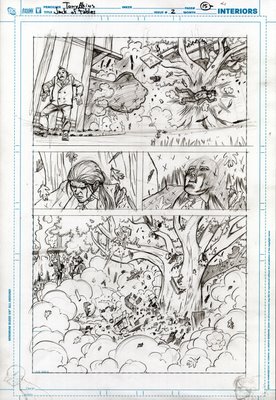 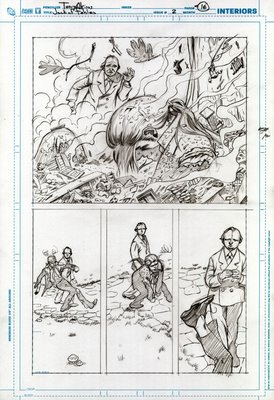 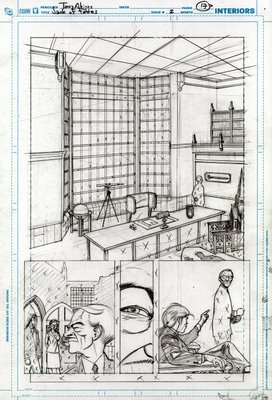 God I wish I had put some paintings on the walls... 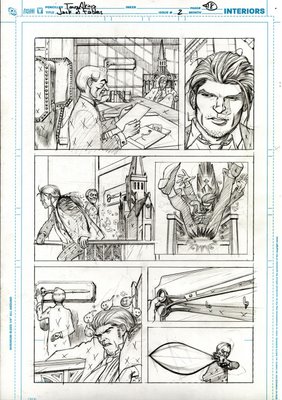 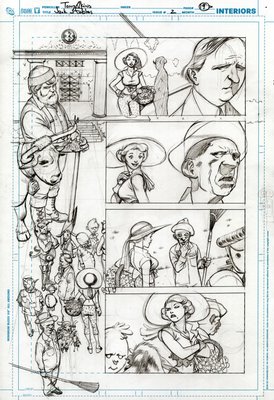 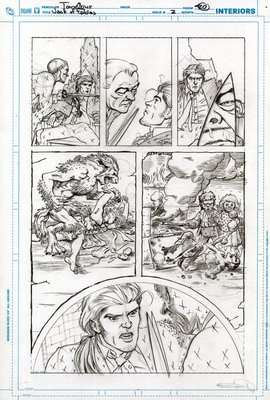 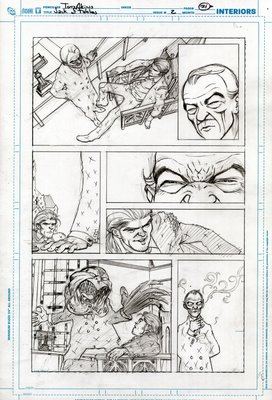 These full pencil pages you have been putting on here are definately the favorite part of any blog I have seen. It is great to see the art in the penciled stage. Thanks again for going through the trouble of posting all of them and keep up the good work.

JOF is definately shaping up to be every bit as fun and well done as fables.

Once again, thanks so much for putting the pages up, Tony. Like Shannon said, it's great to see the art in the pencilled stage and to read your comments. Although I think you are being a bit hard on yourself, I don't see sheep at all. Dust bunnies, maybe...

Tony,
Congrats on an awesome book! Your stuff is really amazing. You have such an awesome attitude in your characters. Humpty Dumpty is so cool, it was one of those Fables-only moments when I saw him running away from the guards - perfect.
This is a great book already!

Keep it up. I look forward to all the issues to come!

By the way, if you EVER want to sell any of those pages, give me a hollar! I would love to own them all (but I am not rich, so I will settle for a few whenever you are willing.)
peblee@nearmintminus.com

Thanks Cavino. Keep watching the blog. Someday there'll be news of my new site.