Howdy!
Seems like just a few weeks ago that I posted Jack of Fables Pencils for Issue #1...Now, here we are at the end of Jack's first arc, Issue #5. What...that's like a hundred fricken pages of having to put up with the greatest jerk that's ever walked the planet. It's been an honor!
Both artist and reader alike have witnessed the development of Jack Horner. The development continues within the pages that are on my drawing board even as I type this. Hopefully doubters have seen that the skilled crafters of this story have ensured that endless ENDLESS tales will be spun with Jack Horner at their core. Of course, this also means that we will have our hands full separating the tall tales from what actually happened at times. But that's Jack for you.
Ever realize that way back when Fables #1 hit the stands, that it was Jack that we saw first? Of course he was in trouble up to his sweaty brow, but that, as it turns out, is his natural state.
Enjoy the pencils! Thanks for reading the series and your comments. It's a blast working on something that's intelligent and enjoyed by intelligent readers. Discerning readers. I applaud you. I rise to the task for you because I know you would not let me get by with doing anything less than my best.
I'll be off the shelves for two months as Steve fills in on issues 6-7. I'll be doing the first work on issue 10 this week. Yes, things get nutty. Just you wait. 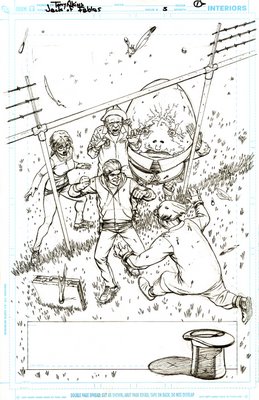 The original title of this issue was "Jack Rabbit", hence the top hat (get it?)...but somewhere the title changed, marooning the unfortunate article of haberdashery (?) to incongruence. 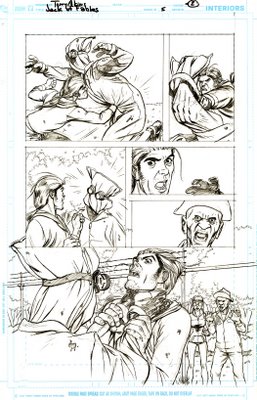 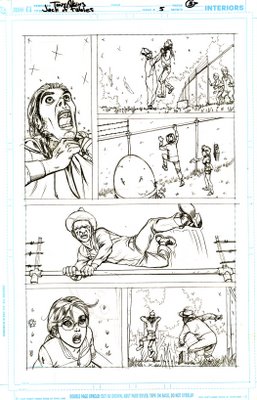 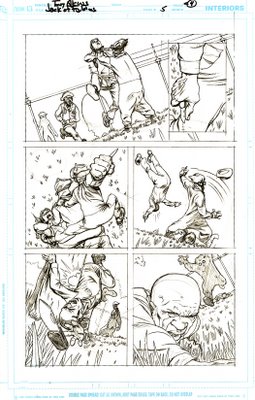 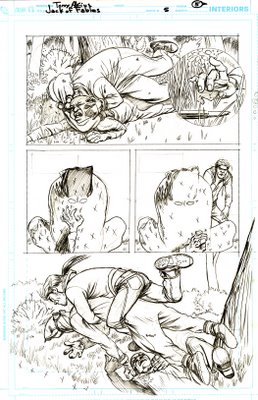 And here is where the fun starts. We all know how much we like to see Jack get in over his big head. What I wasn't expecting was the nature of the Bagman in reacting to being the one attacked. I had treated the Bagmen in a "boneless" manner, but to have Jack mount one gave me such joy; seeing the bagman's ability to squish around and turn it's head 180degrees to see who the phuck had the sac to do whatever was being done still gives me the giggles. 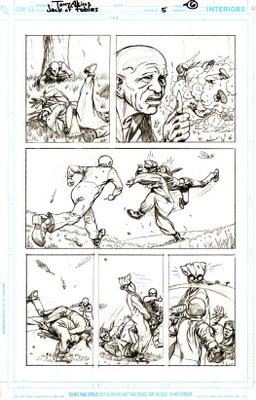 I enjoy the pluralism in comics today; stylistically speaking. So I had no problem with rendering the classic roiling ball of dust to communicate the hellish struggle between Jack and the Bman. Jack's hanging on for dear life, the incredible momentum from the bagmans attempt to catch his assailant hoisting him to the horizontal, also makes me laugh...the alarm on both their faces...then the bmans solution; classic intramural wrestling, if you asked me. 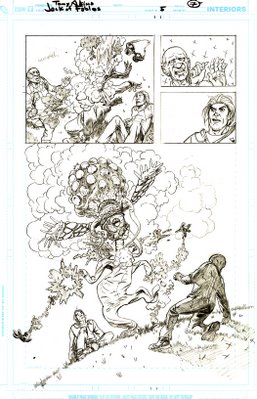 OK, so that thing, whatever it is...I have a BIGGER one!
Really. Once I actually did the concept drawing for the badboy, I realized that I'd be libel for stopping hearts if it saw press. So I made a "baby" bag-thingie. Doesn't the thing have a Dr.Seusian sense to it? Thought that odd, me did. 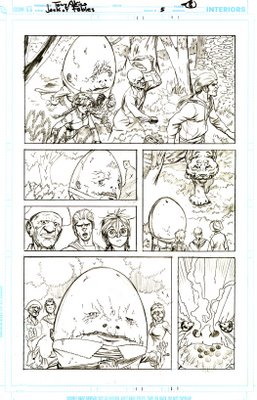 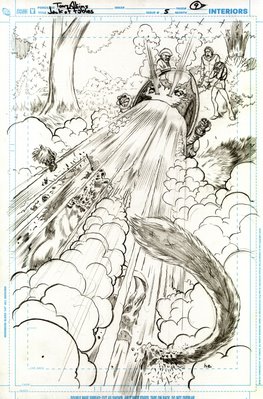 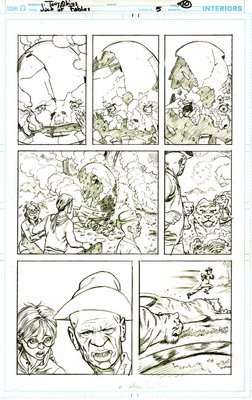 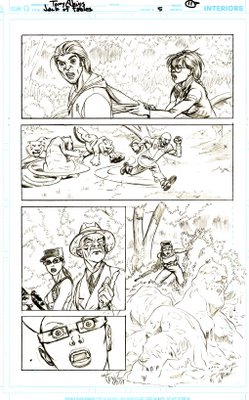 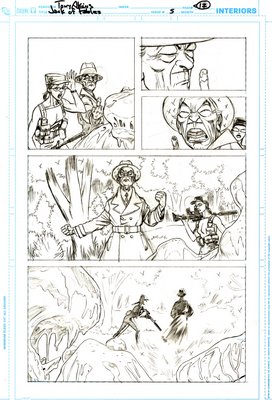 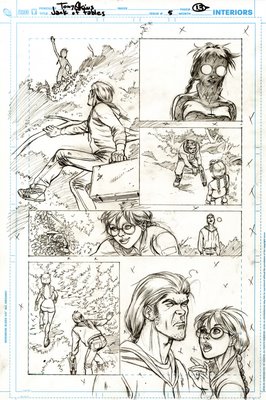 In panel 2 of this page, the way I lit Goldilocks was heavily influenced by the thumbnail of the same page (see breakdowns). I was going to be less dense about the placement of black on her but the little thumbnail just had something foreboding about it, so I carried it over. 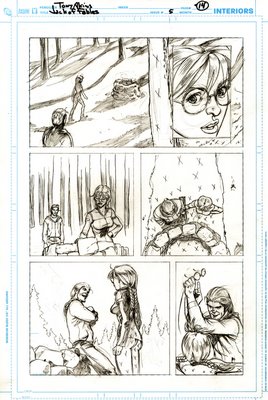 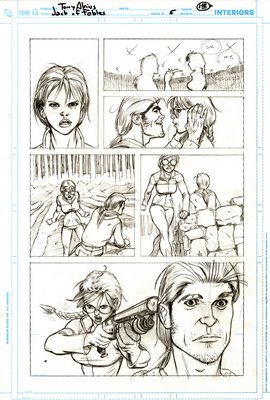 Notice that Shelly had me add, per Bill's request, a shrub to conceal the Goldilocks' Mosberg. 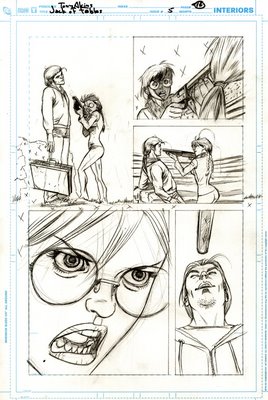 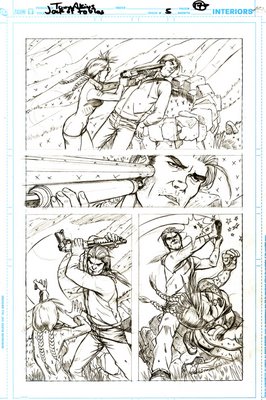 Again, license with the crack to Goldi's skull; the stars she/we see float to the ground before fading completely. 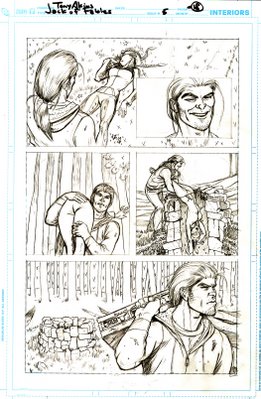 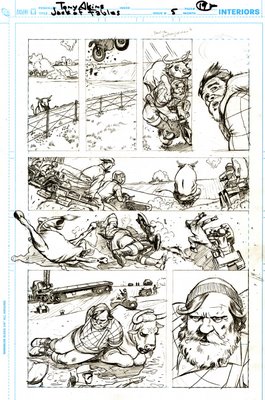 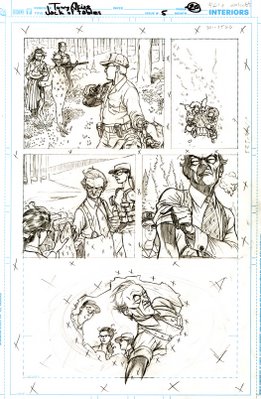 The last panel changed from the original breakdown; having the reader see Revise from within the well a better angle than the initial one..PLUS, it involved so much less drawing. 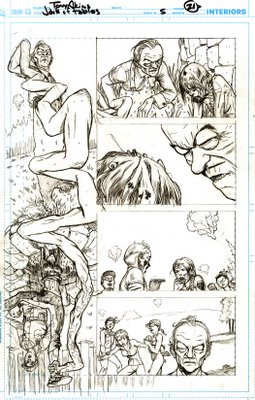 Everyone who notices the snail (Matt was first) loves it. 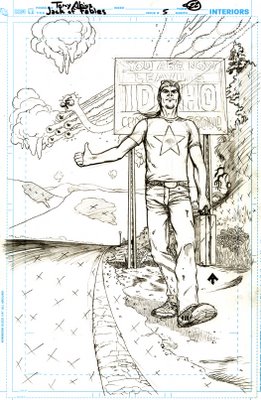 As usual, Tony, these look terrific, and it is a treat to see them in the pencilled form.


But I just realized that I'm going to have no Akins' breakdowns or pencils for the next two months.... AAAAAAAAAAAHHHHHHHHHHHHHH

Just bought the latest issue on the stands. Sweeet. Even nicer to see the WIPs.

As I said a the Forums, I am greatly amused by Jack's lack of concern when Goldi's waving that gun in his face. You're quite good at showing the character's expressions, which always makes me smile. :)

Tony,
This stuff is just gorgeous. I can't think of many people who could've pulled off that first elongated panel of page 21...and do I see a touch of Reese Witherspoon from "Freeway" in Goldi..? Maybe just 'cuz I wanna.

Seriously great pencils, you really pulled out all the stops on this ish. IMO, you've taken the lessons of some of your strongest influences & carried it much further, at this point...not gonna name names online, but I'll sing over a large adult beverage.

Guys, thanks for comin to check out the show. Cinders, I'll try to keep putting art up for everybody!
Fables related or otherwise.

Thanks for noticing Katiria...Years of drawing subtle expressions in advertising...wait, there's nothing subtle to advertisng. I'm VERY lucky to be on a book that gives me a chance to "act on paper", as Shelly puts it. There are plenty of other comics that don't demand so much. It's so much fun to make Jack mug for the story.

Barius Crainius!
Hail!
(sorry too much HBO/ROME)
Thanks Barry! GOD, REESE would be GREAT. To the Fable FORUM!

FREAKIN WOW TONY! what can i possibly say that has not been said before, gorgeous stuff man! The Comix r great aswell, great story and great art... who would of thunk it!

i enjoy seeing your process tony. it's actually a breath of fresh air to see an artist "thinking" thier way through pages, in roughs first.